The History of the Suzuki Carry Truck

The Suzuki Carry is one of the most sought-after Kei trucks by importers all over the world. At the time of this publication, the current Carry belongs to the 11th generation. This article is not just about educating you about the most popular Carry truck generations being exported, but the entire history of the Suzuki Carry.

What year Kei-trucks can be imported to the US?

Any Kei truck older than 25 years can be imported into the US and Australia.

How to purchase and import a Kei truck?

With Zervtek Japan, we can source, purchase and ship a Kei-truck using Japanese auto auctions. It’s cheaper and you get to choose from a lot of options. Additionally, we take care of everything up to the destination port so the whole process is completely hassle-free!

How much does a Kei truck cost?

Importing a Kei truck, depending on the condition, year, and mileage could cost anywhere from 2,500-7,000 USD including shipping to the US and most other countries.

What are the best Kei trucks?

The first Carry had two versions, a light truck and a light van released in 1961. Suzuki, at the time, had a significant market share of the motorcycle and the Kei vehicle market. The Carry was an evolution off of the 3-wheel trucks taking the spotlight off of them.
It was officially released as “Suzulight Carry”「スズライト・キャリイ」.

The reputation of Suzuki being highly reliable alongside the low price made it ever so popular at the time leading to Suzuki’s success in the light commercial vehicle market.

Four years after the first-generation Carry, the second generation was released and was sold from 1965-1969. There were no major changes and kept the original design from the first generation.

With this full model change, the tires and wheels that were 12 inches on the first Carry had been reduced to 10 inches on the second generation Carry. This generation also carried the official “Suzulight Carry” name and record high sales. 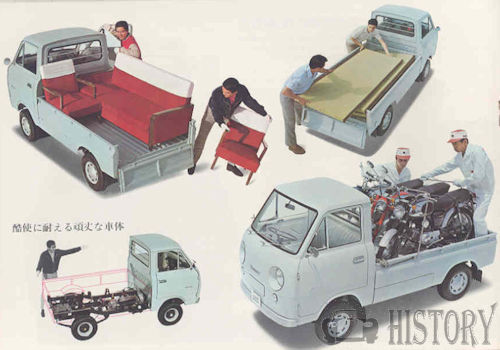 The new Carry came with a full cab-over design with the same FB engine mounted underneath the load area. The starter and generator were combined and mounted directly on the front of the crankshaft. Additionally, the full cab-over design also meant that there was more cargo space to be had.

The second and third-generation production ended together paving the way for the 4th generation Suzuki Carry with a design that had been completely overhauled. The mastermind behind the drastic change was the Italian automotive designer Giorgetto Giugiaro.

A Suzuki Carry van was released at the end of the same year, with a symmetrical and slanted design for the front and the back limiting interior space. The maximum load was 350 for the truck and 300 kg for the van versions. The top speed increased considerably to 95 kilometers per hour.

Alongside a minor facelift in 1971, the Carry received a 27 PS (still at 6,000 rpm) version of the well-known FB engine, featuring Suzuki’s Cylinder Crank Injection and Selmix lubrication system.

Three years after the release of the 4th generation, the fifth generation Carry debuted in May 1972 with a full model change. The major transformation got rid of the triangular ventilation windows in the front door, new round headlights, and a traditional square rear end with a sliding rear door leading to more space. The brake-signal light combination rear tail lights were adopted from the 4th generation into both the Carry van and truck.

Following these exterior changes, the engine was changed into a water-cooled 359 cc alongside a new floor shift instead of the column shift. The engine change made the 5th generation famous for its powerful engine despite being a Kei-vehicle.

Four months before the release of the sixth-generation Carry, the fifth-generation Carry expanded its displacement and body size in order to comply with the changes in minicar standards. It was sold under the name “Carry 55”.

Heavily inspired by the Carry 55, the 6th generation Suzuki Carry appeared with an expanded width of 100mm. It was nicknamed “Carry wide”  because of the overall width compared to other Kei trucks at the time.

A minor change a year after its release equipped it with a dummy front grill which was discontinued in 1979.

The 7th generation is the longest-running model at the present time without a change for a period of 6 years. Suzuki Carry had been the best-selling Kei truck in the JDM scene for eight years. The overall value of the vehicle was enhanced following the introduction of part-time 4WD and some basic design changes to the body.

There were two models for international markets, namely the ST90 and ST100 fitted with the larger four-stroke 797cc F8A for the former and a 970cc four-cylinder for the latter.

Three years after the Van was named Suzuki Every, the Carry Truck underwent a full model change to become the 8th generation boasting a more powerful fuel-injected engine and with the iconic square headlights once again originally designed by Giorgetto Giugiaro.

Suzuki Every came with the option for a high roof. Front disc brakes were standard equipment through some grades. DA was the two-wheel drive while DB chassis code was for the four-wheel drive.

In 1987, a 52 PS (38 kW) turbocharged engine was available in the Every, while the Carry truck received a three-valve, supercharged version of the F5A engine with 48 PS (35 kW).

There was also a short-lived nine-valve version with 32 PS (24 kW) available for better-equipped versions of the Every; the regular six-valve version had to make do with 30 PS (22 kW).

Ahead of regulation changes for Kei-cars in March of 1990, Suzuki Carry and Every underwent some changes. The engine was changed to a larger 657cc F6A engine and included a facelift getting rid of the square headlights for round ones. Stylistically, this is very similar to the current, more modern Suzuki Carry.

The ninth generation debuted in 1991. The body size was widened with more cabin and luggage space per the changes of regulations made in 1990 when the 8th generation was on sale. The round headlights were standard with some grades being fitted with new uniquely shaped rectangular headlights. The engine was also the same F6A with the turbo.

All 2WD models have front disc brakes and 12-inch tires and wheels until a facelift in September of 1993 included a switch from front drum brakes to disc brakes on all models. Additionally, the Carry Van which was still in production alongside the Suzuki Every was to be switched onto the Every nameplate.

A few minor changes occurred to the color of the turn/signal lights and wheel bolt pattern in 1995.

The ninth generation was sold for eight years before the 10th generation Carry debuted in 1999. In order to comply with the mini vehicle standards that continue to this day, the body size was expanded and a semi-cab over type was adopted for the first time since the second-generation Carry.

Originally, it had the same F6A engine 0.6L in-line 3-cylinder SOHC naturally aspirated engine to its predecessors with the option to pick between the FR/4WD and 5MT/3AT.

In 2002, the Carry truck’s cabin shape was changed to a similar design to the Every and the engine changed to a K6A type 0.6L in-line 3-cylinder DOHC naturally aspirated engine.

The 11th generation was released in 2013 after 15 years of the 10th generation Carry. The interior of the cabin has been improved and the loading space increased. The engine is the R06A type 0.6L in-line 3-cylinder DOHC engine, which has been used in light passenger cars such as the Wagon R. A turbo model is not available, but it is equipped with VVT.

You can import any Kei truck with Zervtek Japan. We are efficient at sourcing vehicles both time-wise and quantity-wise. Meaning we’ll get you a lot more options to choose from, bid and purchase, and ship extremely fast by working with a few of the most reputable shipping agents and lines in Japan.

We believe in making sure that you feel comfortable buying from us. That’s why we provide additional photos/videos with an inspection before you decide to bid then photos again when it reaches the port before shipping the vehicle.